In the last week, I have been aware  of a few discussions going on about the value of blogging.

A recent post by Bjørn Furuknap, where he advises aspiring bloggers to shut up unless they have something of real value to say, has resulted in an interesting discussion. At the same time, I came across an old post by Laurence Hart where he talks about blogging.

Bjørn’s blog can be summed up as follows:

Now – when Bjørn’s post came out, I responded to it stating that he was too harsh, and that one of the purposes of the internet is to give people the freedom to post for what ever reason they want. And that the onus actually lies with the reader, who should choose what they read more carefully.

Having said that, what Bjørn had written sat in the back of my head, slowly being processed for the next couple of days.

Then I read Laurence’s post. He had, pretty much, said the same thing 2 years earlier. It seemed that Bjørn, however, was looking at things from a more technical angle, whereas Laurence more from a social/conversation angle.

At the end of Momentum 2010 I had a great opportunity to talk with another blogger  – Andrew Chapman – for three hours, and he told me  “readers are more interested in hearing your opinion”.

So now I find myself questioning the reason I am blogging. Is it to get hits? In response to Bjørn’s post, I stated that I don’t care how many people read my blog (but secretly I do). Is it to provide technical wisdom to people? Well – I certainly want to pass along useful tips where I can, but try not to fall into the trap of repeating what can be easily read elsewhere. Is it to start a discussion? Umm – not specifically.

So – why did I start blogging? I guess because I found that writing a post really forced me to think about things. So instead of saying to myself “Oh – that’s interesting.”, it would be “OK – what does this mean, can it be done differently. If so – how?” (Andrew had commented to me that he found the same benefit from blogging).

In his post Laurence states that if you don’t want people to read what you have written, “just go start a private journal”. That applied to me, but by writing a blog, I felt that the fact that it might be read also forced me to be a bit more complete.

So my initial blogs were more thought blogs. I would try and comment on a variety of things that were related to content management. And then I started wanting to pass on some of the lessons I had learned from what I considered to be technologies/situations that were little written about. I tried to do this in an interesting way. But, as Laurence, and Bjørn, both state – blogging takes time. My schedule became very busy, with work, with study, and with travel. I still wanted to write those thought blogs but found myself writing simple “did you know” posts with no real added value.

It was good to read Bjørn’s post. I thank Dave Coleman for bringing my attention to it (via twitter). If I hadn’t read it, I wouldn’t have got incensed, and then I wouldn’t have read Laurence’s post and, as a result, wouldn’t have decided that it was time to lift my game.

Laurence Hart’s post: So You Want to Write a Blog

Andrew Chapman’s blog: Never Talk When You Can Nod

Also of interest:   Killa Hertz & The Case of the Missing Documents – Part 4 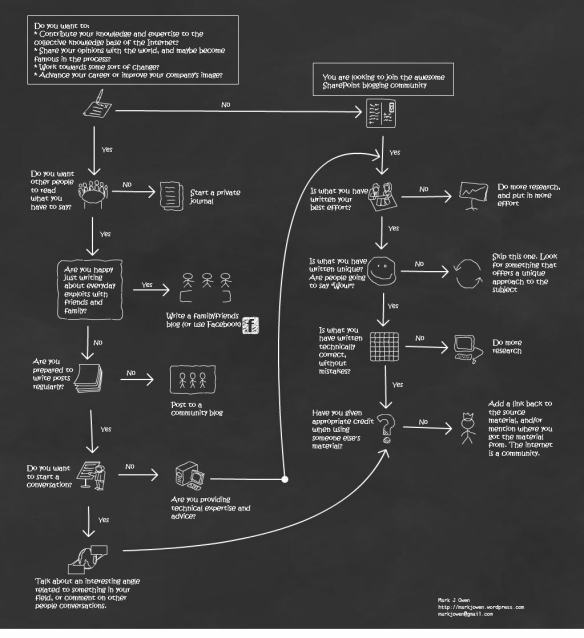 The secrets of good blogging (Click for a larger copy)