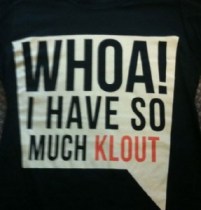 I checked out my Klout score today.

Even though, I’ve been aware of Klout through my use of Hootsuite, I’ve never been to the actual site.

Upon arriving on the Klout site, I was prompted to enter the name of a tweeter. So I entered mine. Within seconds I got my Klout score. It was 11. And I am classified as an Explorer. As well as this there was a further explanation:

Mark Owen is an Explorer

You actively engage in the social web, constantly trying out new ways to interact and network. You’re exploring the ecosystem and making it work for you. Your level of activity and engagement shows that you “get it”, we predict you’ll be moving up.”

Ok – I knew that I was not really a big fish in the Twitter pond yet. So I wanted to learn more. I clicked on the Score Analysis tab and was presented with information about my score. Suddenly felt like I was a socially awkward 14 year old again, and reading my school report:

“Mark Owen needs to engage more with others or be more active to gain influence.”

“Mark Owen has the ability to generate actions and discussions”

“Mark Owen does not engage with very many influencers”

Here’s my score when this blog was written:

And here’s the link to the Klout site where you can read all the gory details over my score.

Now – what struck me as a bit annoying is that the Klout site states:

“The Klout Score is the measurement of your overall online influence.”

This seems to be based only on Twitter activity.

At least, if you read all the “Learn More” sections on the Klout site, there is no mention of anything else.

It is possible to include your Facebook activity into the mix, and Klout have raised $8.5 million to “take Klout to the next level” where they want to include more streams (LinkedIn etc), but until that happens, they should tell it like it is.

That is, the Klout score measures the influence someone has on Twitter! Even if they do include LinkedIn and Facebook, what about the influence that arises from blog posts, or comments on other people’s site. What about other social media avenues?

At the same time, not all influencers tweet regularly (in fact, I read a 2009 report by Baracuda Labs indicates that 73% of users have less than 10 tweets).

In fact, Matt Owen (no relation) did a very interesting “experiment” to test whether Klout was returning meaningful results. I definitely reccommend checking it out (link listed below).

Have a look at the links I have listed below, and let me know what you think – Is Klout a useful tool?

Also of interest:   Look Down

Power of Social & an example of “Wisdom...
views 11
Social Media and Profile Photos
views 11
Beta Testing SLIKK – My feedback
views 29
Is Business Analysis Certification worthwhile?
views 52
I’m not a “late adopter” – I’m a “Late Bloom...
views 19
In SharePoint, where the heck do I fit in? ECM spe...
views 24
Where in the World have I worked?
views 21
Social Media and Pharma Industry, a Paradoxical Ox...
views 13